Author Coach2K Published 10/17/2011 01:58:00 AM
Tags
Articles
I began my online career today on NBA 2k12. I play as the Pacers everytime I play so most of the time I am over matched. If you see the username www.Coach2k.com, and find yourself playing the Indiana Pacers, you know that you have found me. I've played four games and am now 0-4. The goal here is not to win at this point although that would be nice. The goal is to put together a game plan that will enable the Pacers to win and to improve. You learn way more from losing than from winning. My mindset is to slowly improve my game.

I spent most of NBA 2k11 learning to play against Hall of Fame mode. But playing online is the ultimate opponent. The computer AI while vastly improved, still can't match the wits of another human opponent who can adjust much faster to what you are trying to do.

My initial thoughts on NBA 2k12 online play is that it seems the 3 falls pretty easy for my opponents. But overall, the experience has been fine so far with the exception of a couple of lockups before connecting to the game. I just figured that 2ksports was doing some maintenance at the time because today was fine.

Playing online also helps you figure out how to play against so many different variations of defenses. I've been full court pressed, zoned and man to manned. My usual routine is to fall behind early because I turn it over and give up a bunch of easy buckets a lot of times when I play someone new. With the exception of one game, I won the second halves of three of the games which tells me that I am adjusting to what I'm seeing. I just have been getting out of the gate slow.

I wonder if any one else will play the Pacers online. I kind of doubt it. From a defensive stand point, the get sliced up pretty well at this point. My philosophy is this. I start with the basics and improve them one step at a time. Right now, I am working on mastering the offensive side of the ball.

I'll start to put together my first few lessons here shortly. In the meantime, follow me on twitter for updates. 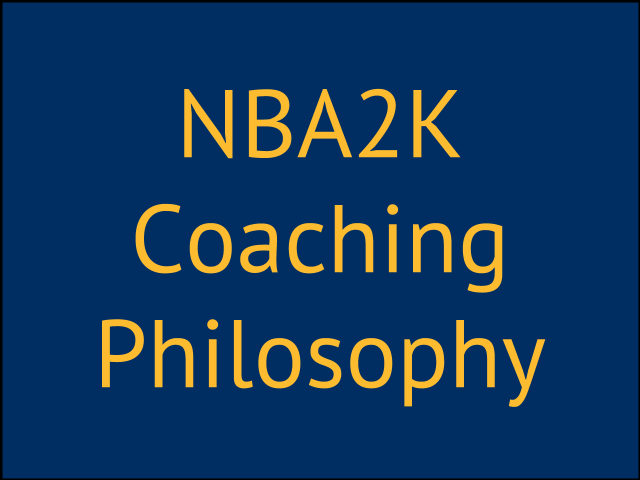 I started playing NBA 2K11 last year. It was the first time that I had played a video game basketball game in years. I spent the first month playing a season with the Lakers versus the CPU on pro difficulty level, five minute quarters using default sliders to get accustomed to the game. It took a little bit to get used to the game controls and how to score and play defense but after a slow start, I started winning and eventually won the championship in the season I played. 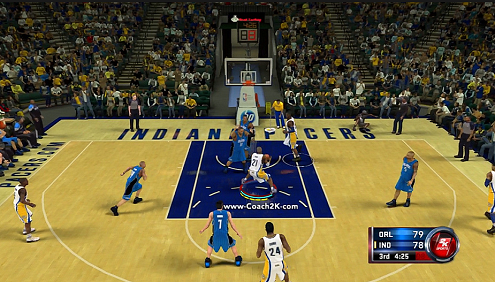 It was during that season that I developed my NBA2K coaching philosophy on which this site is based. Basically, I have a theory and that is that you can win with any team in the league if you play sound fundamental basketball and you figure out how to use each player to his strengths.

Most people I played against in NBA2K11 used one of the big three - the Heat, the Lakers or the Celtics - and for good reason. Those teams were very talented. I've also played online and faced the Bulls, the Thunder, the Knicks and the Clippers as well as a few others. I know that there are people out there who play with the the lesser quality teams in the game and some who actually use those teams properly.

I wish more people would do that because it just brings more variety to the game.

After I played that first season with the Lakers, I decided that it didn't mean a whole lot to win with the Lakers on pro especially since I live in Indianapolis and have been a Pacer fan my entire life. I then have vowed to play with my hometown team - the Indiana Pacers. I also decided that it would also mean more to win games on hall of fame difficulty in the game.

So, I fired up a new season and began playing. Fifty games later, I won my first game on hall of fame difficulty. I was thrilled.

But my quest was still not complete because I still did not play the best basketball I know I could play in the game. It was one dimensional. I scored 65 points with Darren Collison. Every shot was a three except for two free throws to ice the game. It was a victory though and I'm very happy I got it.

Once I saw what I could do with Collison on hall of fame difficulty was pretty surprising. It led me to understand that if I applied what I learned on how to maximize his talents, then I could also learn how to use every player extremely well on the squad.

My first premise was that no matter how good I was in the game, I could always find a way to get better and that you could win with any team in the league if you knew it inside and out.

I then worked on another player to work on his game and repeated the same process.

The other important thing I decided was that playing as many tough human opponents (not just the CPU) as I could find multiple times, who could more quickly recognize what I liked to do and take that away that it would help expand my game more quickly. The reason is that it would force me to find new and different ways to get guys open. It would also force me to try and learn to do the same to them. This would make us both tougher in the long run.

At that point, I set out to find users for as many of the 30 teams in the game who also think like I do.

Playing users brought in a whole new dynamic and that was that unlike the CPU, I got something new and that was direct feedback from them on exactly what they didn't like about my game. Because of that I also decided that I needed to add an additional goal and that was to try and eliminate, as best I could, things that irritated those I played against.

I not only wanted to win, I wanted to play in such a way that people would respect as well. I wrote more about these things in these three articles:


Is my game complete yet? Not by a long shot. It's never complete. There's always another level to move my game upward. It may not seem obvious at first, but the more I think about it, play games versus the CPU and other users and the more I practice, a new way to improve makes itself known.

Mastering NBA2K is just like mastering anything else. You master one small skill and then you master the next. Eventually, you master the game well enough to be a formidable opponent with your chosen team.

So if you are here looking for money plays, or cheese plays or an easy way to win - you won't find it here. But if you want to master the game of basketball then you have come to the right place.

Do I win every game? No. Am I a master yet? No. And that's part of the fun, because I will let you see all of my mistakes, my wins, my frustrations. I will publish videos of my games, win or lose, and open up the process so you can see how I learn how to play and teach you what I learn.

My goal by showing you all of that is to hopefully inspire you to do the same and get out there on the court playing and working on your game.
Newer Posts Home
Subscribe to: Posts (Atom)