Home Articles What ESPN Won't Tell You - Where Lebron's Going

What ESPN Won't Tell You - Where Lebron's Going

Since Lebron opted out of his contract with the Miami Heat, the big question now is - which NBA team will he play for next year? After hearing the news he had opted out, I immediately got on the phone and contacted my sources in the NBA to get the lowdown on where he might end up next. They tell me that he definitely plans to leave Miami and has narrowed down where he would like to play to seven teams. Where he wants to play might surprise you. I know I was taken by complete surprise as no major media outlet will report the truth about his plans. 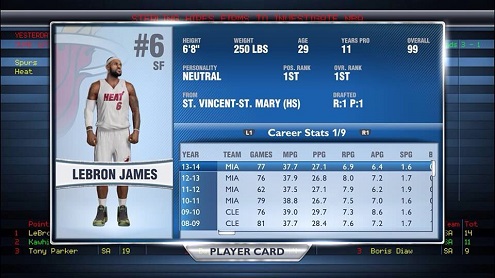 Before I get into the options he is exploring, I think it's important to get a feel for Lebron's mindset right now. Let's not forget that he was widely criticized for leaving Cleveland and he's human and does feel pretty bad about that. He's also been criticized for passing the ball to the open man in big shot situations. Although he got the big monkey off his back by getting two rings, he does have to deal with two failed championship runs including getting man handled by San Antonio in this year's finals.

Oh, and of course, we all know any team that has been to four straight finals must under take a major overhaul in order to continue that success too - right?

What I'm hearing from my people in Lebron's camp is this. He's tired of hearing it from the critics and he's tired of being hated around the league. Because of that, the solution he has come up with is that he wants to do something really BIG and something that no other superstar in the present free agent era has ever succeeded in doing before him - not even himself.

In fact, it would be unprecedented.

Bring a championship to a team that can't win one because it can't draw free agents like the Laker's, the Knicks's and the Bull's.

After all, when you think about it, it's should be pretty easy to win a championship with the Lakers. With the media lobbying every single player that becomes a free agent to the Lakers even the ones from the big markets. I mean, come on, how hard is that to do when it's easy to get players to come play there (and even take paycuts), really?

Now, the big media companies such as ESPN will have you believe that he's only interested in the Lakers with all their championship banners, the big endorsement deals, the hot women and the scenic views, but that's just wishful thinking on their part.

He doesn't want any of that because I've been told that's not him.

He, like me, is supremely disappointed that whenever a player becomes a free agent that the media always reports that player is going to LA Lakers, Chicago or New York and not to a small market team like Milwaukee, Minnesota, Utah or the team that many free agents must play for on their way to the big market - Toronto.

Lebron has gone even farther though and told his inner circle that one thing he loves is an underdog and that he wants to go be one - and make it as hard as possible to win a championship. That way, he can truly do something most superstars can never do - bring a championship to a team that otherwise would not get one - and be considered great for it.

After all, if you can win a championship on a team where no one wants to play, then you must truly be a great player because so few have done it. Let's have a look at a few players on the list of guys who couldn't win on teams no one wants to play for.

The list goes on to players like Ray Allen, Pete Maravich and even Lebron couldn't do it in Cleveland before he got talked out of town.

The good news is, there are a lots of teams to choose from. All of which haven't won a championship and all of which Lebron could, if interested, take a paycut to play for just like he could do with a team like the Lakers. Not only that,  they would also be willing to partner him up with Melo in the process if he would take a paycut as well to win the big one.

So let's look at the list of a few NBA teams that haven't won a championship that surprisingly ESPN never usually reports a major free agent is reportedly going to even if they had unlimited cap room.


Pretty surprising considering  that list is nearly half the league. Thirteen of the thirty NBA teams have never won a championship. I'd be willing to wager money that nearly every team on that list will never win a championship, at least half the list.

My sources tell me that 13 teams was too big of a list and that Lebron asked them to pare down the list to a smaller group. After all, he argued, teams like Utah, Indiana and his past Cavaliers teams have been to the finals. At least they have had a shot. He wanted a list of teams that have never been to the finals.

His people put together the list of teams that haven't been to the finals. Those teams are:


They presented this list to Lebron who commented that it was still a quarter of the league and he kind of chuckled and asked his entourage what team they thought had the worst reputation in league history.

That's when one of them spoke up and said do you know what a Los Angeles Clippers fan does after his team wins a championship?

He told him they turn off their Playstation 4.

At that point everyone was rolling on the floor laughing and the decision was made that since the Clippers had been in the league since 1970, were notoriously known as being the league losers and the stepchild to the Lakers that it was indeed the epitome of a bad franchise - probably the worst in history.

After all they said, we already know if you go to Toronto and drive to the basket and get clobbered in the playoffs they aren't going to call it. At least because the Clippers are still in LA, you probably will still get the calls. That's not going to happen in a small market.

Even Lebron had to admit that was true.

So, ironically, the worst team in the league is still a big market and yet, you heard it here first.

Lebron will be a Clipper next year.