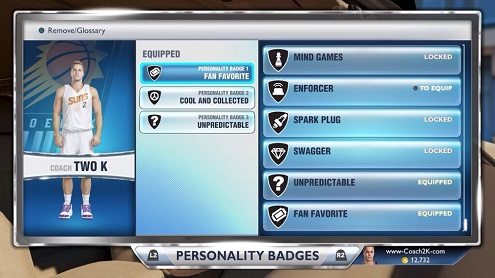 After playing about 20 games in MyCareer as my Coach2K MyPlayer, I still have not upgraded any of my attributes or abilities. My reason for not upgrading is because I'm trying to approach the MyCareer mode from a more realistic perspective. My overall rating is still the 64 that I started with. I've been playing well enough, getting over 20 minutes a game and averaging a "B-" while helping the Suns get some wins. I thought it was time to look in to giving MyPlayer some personality and decided to add some personality badges. I think this is the most realistic place to start improving your MyPlayer because many of these are mental qualities and not skill based. In real life, you'd already possess some type of personality regardless of skill.

My Strategy To Adding Personality Badges To My MyPlayer

[catalyst_hook_box name="googleinpost"]I think it is important to recognize that every player is unique but not every player is dominant - especially in their first season. Even dominant players progressively add new moves in the off season and not during it. Every player has distinctive personalities that they bring to the court and I want MyPlayer to represent how my own personality might be on the court if I really played in the NBA - not the "dream" version of what I would like it to be. For example, I could have added "Enforcer" but did not feel it represented me because I am more of a finesse player.

Here are some other important details about the personality badges in MyCareer:

Based on that kind of thinking, here is what I decided to do as far as the personality badges I added right away.

As MyCareer progress, I have my eye on a few other personality badges. There are two specifically that I want to add. One is Heart and Soul and the other is Floor General. These two badges I think make more sense after I've played awhile. With Floor General in particular, that's more of a veteran skill that comes after a team gains confidence in you. Other skills I may never consider adding like Hardened or Swagger.

What Personality Badges Did You Add In MyCareer?

Let me know your experience with your personality badges, what you added and why in the comments below.