Don't Use CPU Assistance in NBA2K 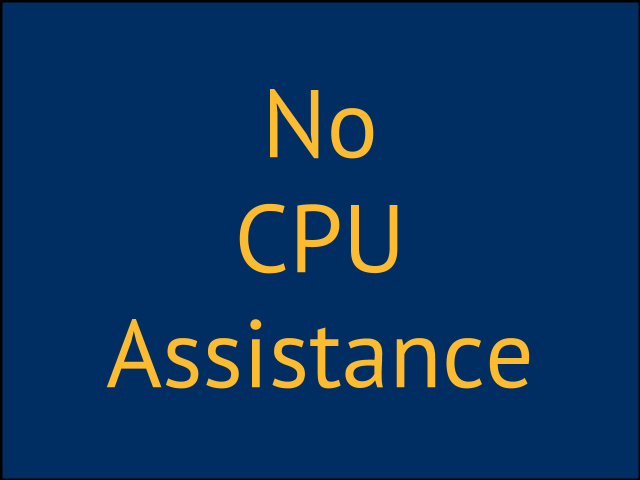 When NBA2K11 came out, the presentation of the video game on the screen was so true to life, that it actually got me to buy the game. I hadn't played a basketball video game since the Tecmo days. Once I started playing the game, I was hooked. Over the Christmas holiday, I played a full season of 100 games against the CPU on default settings (5 minute quarters, pro difficulty, default sliders) using the Lakers of all teams.

After I played that first season, I realized I didn't have to play the CPU all of the time and that I could play other people in a quick match. I eventually started contacting the people I liked playing and also people I met on 2K forums to see if they wanted to play.

In order to match up, we had to use the play with friends mode and it was there I really started to think about what settings to play other users on.

In many ways, it seemed the game engine was new to existing players and NBA2K11 also brought a lot of new users like me into the series. A lot of the people I originally met back then hadn't given much thought to what settings you played on.

What would happen is that you wouldn't play anyone on consistent settings. Some guys played default sliders and some simulation sliders. Some guys played 5 minute quarters, some 8 minutes and then others would play 12 minutes. I remember having many pregame discussions to get people I played to play the same settings that I played everyone else on so I could compare game results.

Eventually I got to the point where I just decided that I only wanted to play people who wanted to play on 12 minute quarters, hall of fame difficulty with simulation sliders. To me this was like playing regulation basketball. Playing on the same settings versus all users across the board made sense to me just like playing on 10 foot goal instead of an 8 foot goal did.

It's been a while since 2K11. The game, while good, is not new anymore. Guys know how to play when they get the game because it's not much different than the prior year. Sure there are little nuances that make it different here or there, but it basically works the same and consistency from year to year is a good thing.

I know personally, I hate having to relearn everything every year.

But because the game is not so new anymore, we have a lot of hall of fame level players out there now. And, it got me thinking that as hall of fame users, shouldn't we run games between each other at the highest level and also control all the decisions and actions in the game manually?

My feeling is yes.

So beyond the 12 minute, hall of fame difficulty, simulation sliders, what else should we consider? To me that would be all of the manual settings.


I think what we should do is dig deeper into the specific settings available to us as players and ask if that setting is a manual setting or not. If it is a manual option then each player on both sides should set it to manual or at least set it to match the other user they are playing. 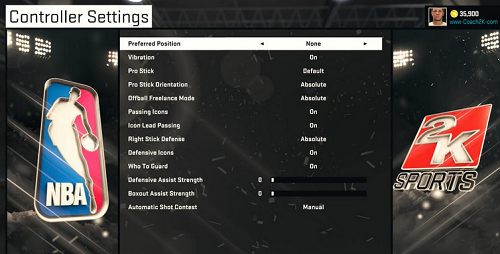 To determine which settings we should look at changing, have a look at the controller settings screen I've included above. You'll see several settings. Some have an on/off option while others have titles that include the words "assist" and "automatic".

It seems obvious to me that when hall of fame users play each other they should play defense manually and not have the CPU helping them. You can see in the settings screen, I've changed defensive and boxout assist strengths to zero and automatic shot contest to manual and in our league, it's now actually mandatory to play on those controller settings.

Another setting on that screen is passing icons with an on or off option. You can see I have it set to "on" because it provides information but it doesn't make the pass for me. I still have to do that manually. Because of that I don't consider an on or off option as a manual setting. 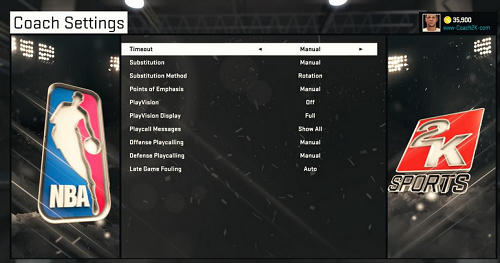 In the coach settings screen, you'll see several settings that have options of manual or auto. In those cases, I think those all affect game play and should all be set to manual between hall of fame level players.

The only exception I'd make regarding the manual settings would be the late game fouling. At this point, manually fouling in late game situations seems to penalize the defense because it's so hard to trigger and would recommend both players be allowed to set that to "auto".

So to clarify, if a setting has an on or off option, I don't consider that assistance and to me any setting with an on or off setting between users is not assistance from the CPU and therefore not a manual setting.

An example here is playvision. It has an on and off switch. I don't consider that a manual setting that would affect play between users.

Once the settings are set and gameplay begins, all controls available to a player once the game begins should be allowed. In my mind, this would include the use of the 2K smart play option which I believe might be necessary to trigger certain freelance options.


As hall of fame players, I think you should consider playing with all feedback off. But while I think that would show a great knowledge of your team, it's kind of high level goal specific to whether a user wants to pursue it but doesn't really affect game play.

An example might be to learn to play passing using only using the stick and not icons.

Another good example might be play art. If you run plays the game is definitely harder if you turn play art off. Having it off would require a thorough knowledge of your plays and where they initiate.

Because I think all players should strive to master the game and to know one specific team that well, of course I think that's a great goal to have. But I don't consider it essential and think it's just one of those things that people can do to make them feel they have elevated their play to another level but is really unimportant in their matchup with another user.

What do you think?

Should we raise the bar and expect more from hall of fame level users in head to head play?