How to Shoot without the Shot Meter in NBA2K 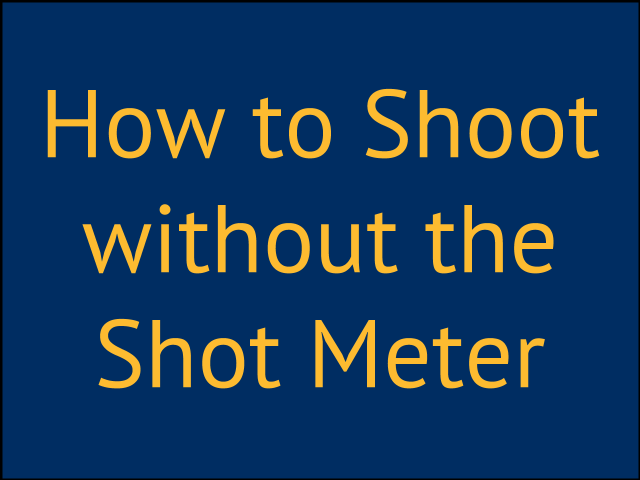 In our league, we have some pretty good players. I'd consider them elite hall of fame players. We've been discussing ways to make the game more realistic and one of those ideas was to learn how to play the game at the highest level without any cpu assistance or feedback from the game. If we do that, then one important component would be how to learn how to shoot without the use of a shot meter or any shot feedback.

To do that, what you need to know is that there are three basic results to a shot in 2K. You can shoot it early, right on time or late. Remember an early or late release can still go in, but without the shot meter or shot feedback turned on, how can you tell how you did if it doesn't go in?


So rather than look at the meter or the feedback to see how you did, you are going to watch the ball and see what happens to it. Then you'll adjust.

The best approach to learn is to go into freestyle practice mode and start shooting. I always use the same camera angle in practice that I do in game. I set up the difficulty level to hall of fame sim and then turn off the shot meter and shot feedback. Then I start shooting.

Obviously, you still have to pay attention to your shooter's motion but once you've released the ball, you'll watch what happens to the ball rather than look at a meter for feedback. I've struggled all year getting releases down. Part of the problem is the Pacers don't have elite shooters and 2K tightened up shooting so much that it was pretty hard to get green releases until patch 4 this year.

A tip that helped me was to watch the elbow of the shooter and when it should go forward, that's when you release.

Anyway, I hope that this teaches you how to shoot without the meter and without shot feedback turned on. I actually think it's more fun to learn how you did from the ball instead of from the game.

Let me know how you do if you go without feedback. Here's a video I did to walk you through it.