The C2K Pacers announced their summer league roster yesterday and today, each of the players on the summer league roster worked out individually with Coach2K. Depending on their skills and position, they focused on one, two or three of the following skills - shooting, isomotion or post shots.

Before beginning the workouts, Coach2K put the settings on hall of fame, simulation sliders and also on the camera settings that he'll use in the games the team will play on. Even if you play games on pro, it's still a good habit to practice on hall of fame difficulty when you prepare for games.

The summer league roster is a new team to C2K, so there is a lot of work to be done. Let's talk about the three skills you'll want to work on in freestyle practice mode. Within practice mode, you can go in to the options screen and under controls to find out how to do each move in the game.

The key here in freestyle practice mode is to start learning your guys. You can do that by looking at their ratings, signature skills and focusing on those skills they are good at. The last thing you want to do is try and make a guy do things he isn't strong at.

So focus on the fundamentals in practice mode and on working on player strengths. Being an isomotion artist is cool and all but not essential to what I preach and that's being solid fundamentally with the basics.

The summer league squad will go through it's shoot around in preparation for some team scrimmages before heading over to Europe and playing games versus the Euroleague and that will be the next thing I talk about.

"After we got eliminated by the Raptors in the first round of the C2K Playoffs, what we learned was that we have to get better. We didn't practice enough last year or learn enough about our personnel.

I got together with the coaching staff and we had a long discussion about what Coach2K could do this year to help people learn more about NBA2K.

One of those ideas was to compete in a summer league from start to finish while showing some of the behind the scenes preparations needed to improve your game over the summer before NBA2K16 comes out and then carry that over into next season's game.

We are excited to take our guys overseas, take in some sites and see these Euroleague teams. I bet that I, along with a lot of other NBA2K fans, don't really know much about these teams. It'll be good work for us, good to get some exposure for the Euroleague and good for C2K Pacer basketball," said Coach2K.

The roster will be a duplicate of the one the real life Pacers will use in the Orlando Summer League. It will be led by starter Solomon Hill and the Pacers first and second round draft picks - Myles Turner and Joe Young.

Through a cooperative partnership with the Euroleague, the C2K Pacers will play all 25 Euroleague teams. The trip will start in Spain, then head to France, Germany, Poland, Lithuania, Ukraine, Russian, Israel, Turkey, Greece, Serbia and then finally conclude in Italy.

Follow C2K overseas and catch every summer league game. The tour will be showcased on Coach2K's YouTube channel. You can catch important info about the tour by following C2K on Twitter.

Is it Time for Larry Bird to Go? 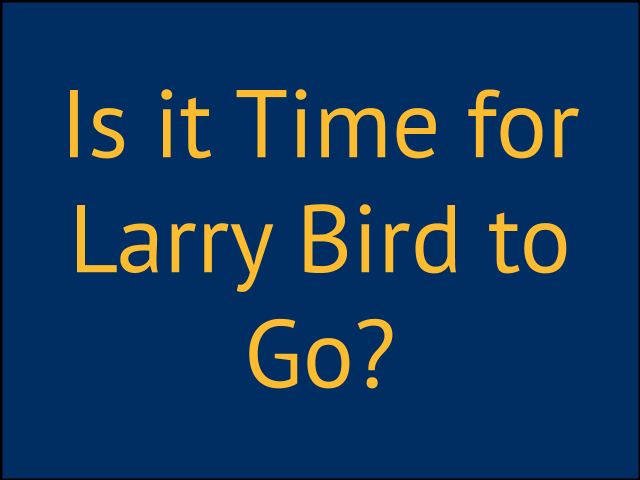 This has been an interesting off season for the Indiana Pacers. After missing the playoffs in 2015, both Larry Bird and Frank Vogel indicated a desire to "go small" next season and move Paul George to the four spot. 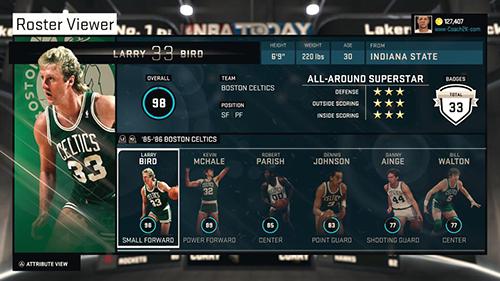 They followed up their public comments by drafting Myles Turner with the eleventh pick in the draft with the expectation he might be a stretch 4 or stretch 5. I really like Turner for his potential defense at the rim but I think it's a little too much to expect a guy who shot 27 percent from the college three point line to be a factor from NBA three point distance.

With the whole league ready to dig a grave for the old school post player, it seems before you know it, we'll just have five 6'9" guys standing on the three point line.

The problem with the league now isn't that there's been some stroke of coaching genius to stretch the four spot, it's that it's almost impossible for anyone to get good position on the low block. Unlike the perimeter where you can't touch anyone or it's a foul, in the post it's a slugfest that allows bigs to be pushed completely out to the three point line before they can get the ball.

Coaches have recognized that you aren't allowed to post up on the low block anymore. But I think it's a mistake for Indiana to abandon a strategy that got them to two straight Eastern Conference finals just a season ago.

Let's not forget that in 2012, 2013 and 2014, the Pacers were eliminated by the same Miami Heat team three years in a row - the last two times in the Eastern Conference finals. And let's also not forget that the Heat had one of the best players in NBA history in Lebron James. While the Heat had Chris Bosh to stretch Indy's defense, he actually failed the Heat with last second shots to beat Indiana more than once.

Not to mention that in order to beat Indy in some of those playoff games, it took some dirty play against Collison, Stephenson and Hansbrough to accomplish it. I'll take that season any day if that's what has to go down for the Pacers to lose.

Of course, getting that close to the NBA Finals and missing out hurts but the reason we lost those games was not because we played big and even if it was, it's my contention that even if we had been able to go small in those games, the result would have been the same. The Pacers would have lost anyway because Lebron was there and the league is an entertainment business first, and sport second.

I say that because the Pacers have had some great teams since 1994 and have had eight conference finals trips and only one Finals visit. And that visit in 2000 was just a repayment by the league for getting royally screwed on that 4 point play in New York. If that doesn't happen in 1999, there's no finals visit in 2000.

An Eastern Conference finals berth IS a championship for Indiana.

When you look at last year, Paul George didn't even play due to his injury and the Pacers still almost made the playoffs and because of that I think it's a knee jerk reaction to ditch a game plan that was working when your best player didn't even play last year.

Since George usually has a size advantage at small forward and if you move him to the four, it negates that. I think it's going to take a lot more effort on his part to guard a four.

But the real strength of Indiana and secret to their success was first and foremost it's team chemistry and it's willingness to share the ball.

And that's where Larry Bird has been screwing up.

When he threw Roy Hibbert under the bus at the end of the season, he publicly called out a guy who you should know was not going to opt out and left him in the locker room. It's one thing to tell a guy he's underperforming in private and it's quite another to do it in public. Nobody likes being called out in front of others.

This follows letting Danny Granger go at a crucial time to get Andrew Bynum when the team didn't really want to let him go either. I'm sure Lance left for a reason too and my guess that was due to management getting on him about his "antics" and we ran him out of town.

Team chemistry is a delicate balance but it's the key to doing anything in the playoffs.

But calling out Hibbert and pronouncing small ball was on it's way in had another unintended effect. That was that it pretty much told David West he should opt out and move on. And he's the heart of the Pacers.

With about half the team a free agent heading into July 1, I expect guys like Sloan, Stuckey and Scola to be back but Paul George could have a tough time next year because Indianapolis is not a popular free agent destination.

And so when Indy can't get those free agents and struggles next year, I think it's going to be time to evaluate Birds' role in breaking something that didn't need to be fixed.
Newer Posts Older Posts Home
Subscribe to: Posts (Atom)