Home Articles PlayNow How to Be a Better Opponent in NBA2K

How to Be a Better Opponent in NBA2K 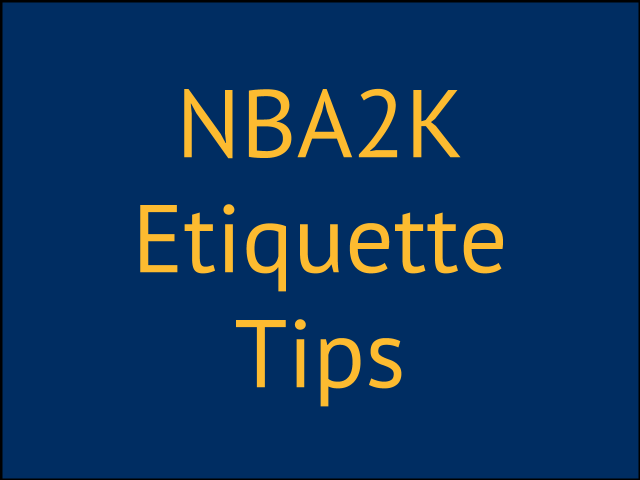 While you can't pause the game to replay yourself posterizing your opponent anymore (thank you 2K for removing that), there are still a lot of things that you might be doing that annoy your opponents.

Unfortunately even I'm that guy sometimes (just by writing this article people will label me like that), but nobody wants to be "that guy" if they really want to improve their game. So what I did here was put together a list of simple things that you can do to be a better opponent in NBA2K.

Now before I start, I do want to point out that this is not a list of how to play "sim" or to point out what I think is "cheese". These are things you can do that don't take a lot of effort on your part that can improve the gaming experience for both you and your opponent - most of which will go unnoticed if you put them into practice and that's the whole idea.

A lot of these things we've also adopted in league play, many at the suggestion of our C2K League commissioner PSN AlabamaRob. And so, I wanted to thank him for his input as well because I didn't even consider some of these things until he brought them up.

So there you have it. Those are my 31 tips to being a better opponent in NBA2K. Overall, the best think you can do is just be a good sport and do the best you can. Hopefully, these tips will help you out. Let me know in the comments if you have any other suggestions.

I agree with ALMOST everything you said. Tho it seems this was made for 2k15. Not 2k16. I have to pause the game to make subs with the way they changed in-game quick subs in 16. It takes too long. Longer than the 24 sec shot clock. I can pause the game and do it in less than 10.

And you seemed to have said two different things. You said take criticism because it makes you better... but then said not to give criticisms even if they ask for it. Why not if it will make the other guy better? We want ppl to help us with criticism but we shouldn't be willing to do the same?

And last, I don't get why you wouldn't throw alley oops all day if the other guy can't stop it. When you say don't give the other guy a reason to say that's why they lost you are literally saying don't let them complain that they lost because you scored more points lol The whole point in playing is to win and you win by exploiting the other teams weaknesses. If you don't then you're not being a good opponent. There's no point in trying to get better if the reason isn't to win more games. Should we just say "all that matters is that everyone had fun and now everyone gets a trophy"?

The rest I completely agree with. The only thing I would add is to play defense on the ball. Dont just play on the center the whole game and let the computer do all the work. That's kind of the same reason you shouldn't play zone. The comp does all the work. When you do that you aren't actually playing that person and if you win YOU didn't actually win. The computer did.

But I play with the hawks. Always have cuz I'm from atlanta. My gamer tag is Mista Pinion. Hit me up. And try to win please.

Ya after reading i figured it was old, since you can't show stats on 16, and scrolled up to see just that. I play quick match but still appreciate the article.

I wonder the same thing as you. When did quitting become acceptable? Kids these days. They don't mind saying they "rage quit" but when I hear them say it I think "shouldn't they be embarrassed about that?". The only time I ever send someone a msg mad about the game is if they quit. I don't care if I don't have a chance to win. I finish the game. Mostly because I like checking my stats after and can't if they quit since it take you straight to the quick play screen. But I'm not a quitter. I always finish what I've started. Even if I'm getting obliterated. Tho that rarely happens since I've got a 63% win percentage, I still wouldn't do it if it did happen.

And I do like to flash start. Mostly just to say "nice shot" or "good play" since I don't like wearing a mic while playing. Too distracting. Gotta focus. But I never flash start after I made a big basket or blocked a shot. That's just annoying. Tho I might flash while the ball's in the air on a jump shot or three just to show I got a perfect release lol

Pretty much everythingyou've said still applies to quick match. I still rematch anyone who asks for one, if they tell me they are lagging early then I'll give them the ball back if they run straight out of bounds or never inbound the ball, turn off the mic or kinnect if you're playing music, and DON'T QUIT.

That's too bad you're on ps4. I'd like to get in one of these leagues. I've never been in one. I bought my lil bro a ps4 for Christmas but he took it back for an xbox1. Otherwise I would have looked you up on his.