The Greatest Indiana Pacers of All Time 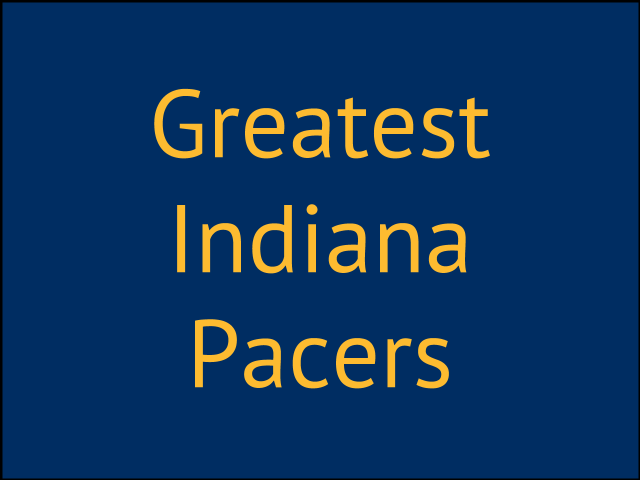 Since it's the offseason, I've been playing NBA2K with an Ultimate Legends roster created by Brian Mazique. One of the coolest things about the roster is that he created a Reggie Miller that I can use in the game.

Those of you who follow NBA2K know that Reggie is one of the two most wanted classic players that just aren't available in the game because of licensing issues. The other most requested player is Charles Barkley who he also created.

That's a real bummer for true fans of their teams who want to use their classic players.

Anyway, while he has done an excellent job with his roster - the Reggie he created is great by the way - I thought there were a couple of players he could have included on the Pacers legends team.  I'm hoping that when he does his next Ultimate Legends Roster he can refer to this as a resource for who I'd like to see on the Pacers legends roster.

Since I've been watching the Indiana Pacers since the 70's, watched nearly every game of Reggie Miller's career, was a season ticket holder for several years , went to the 2000 NBA Finals and am probably the most dedicated Indiana Pacers user in NBA2K history, I feel pretty qualified to at least create a list like this.

While keeping in mind a list like this is always a subjective exercise, especially considering I didn't see many of the guys from the ABA days, I still think it's a pretty good roster.

Currently, NBA rosters allow for 15 players and so that makes it real easy to create three teams and have my first team, second team and third team selections along with why I chose them.

These are the guys I would pick to start on my greatest Pacers team.

I'm hoping that in future versions of NBA2K that we will have the opportunity to customize coaches in the game and this is my list of the best Indiana Pacers coaches in franchise history. I didn't include Jack Ramsay even though he was definitely a great coach as well as a hall of famer. He deserves to be a Portland Legend more than a Pacer one.


Other guys I considered

There were other guys that I liked alot for Indiana. Guys like Chuck Person who served up some of my first favorite NBA playoff memories, David West and George Hill for their contributions, Travis Best as a backup to Mark Jackson, Derrick McKey because Larry Brown loved that guy so much, Detlef Schrempf and LaSalle Thompson for bringing a new attitude to Indiana and to Bob Netolicky from the ABA days. There were also players that came through Indiana that were great players but I didn't feel they were true Blue and Gold players.


So there you have it. Those are Coach2K's selections for the greatest Pacers players of all time. Thanks to Brian again for creating his Ultimate Legends roster. It's been a blast to play and I hope he does it again next year.

Who is your team and who would you put on the roster? Let me know in the comments below.