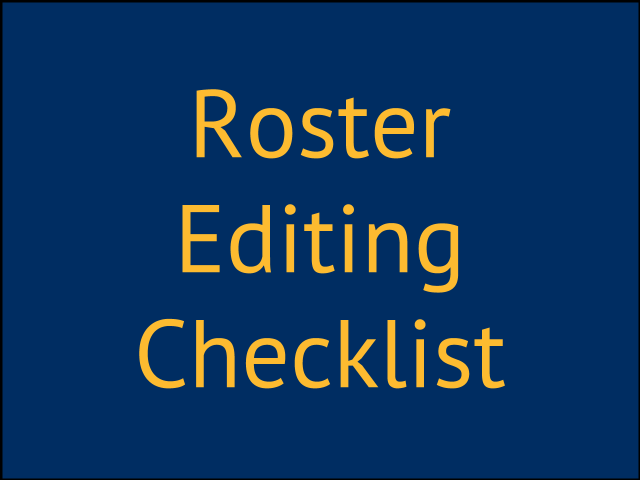 Over the last couple of years, I've grown to appreciate custom rosters. My hat goes off to those guys who dig and start editing the official NBA2K official roster into one that plays not only the way they would like it to, but those who download it.

However, even though are some great rosters out there, there are probably ten times (or more) that number of rosters that have a lot of holes in them. It's probably because the roster project was a bigger time commitment than they expected. But, I've even seen rosters that are complete that are missing players, haven't assigned plays to players or just have attributes that don't make any sense.

Because of that, I felt like it would be a good idea to put together a pretty detailed NBA2K roster editing checklist so you'd know what areas you need to address up front.

So what I'm going to do first is talk about planning your vision of a roster and then I'll go into the more detailed checklist.

What kind of roster do you want?

Before you begin your project, you'll need to decide what kind of roster you are going to create. Here are some custom roster ideas you might consider. These aren't unlike some of my MyTeam theme team ideas I already shared with you.

Once you know what kind of roster you want to create, it is time to set some rules about how you will address the process.

Roster rules you might want to consider before you begin

After you have decided what kind of custom roster you are going to make, you might want to consider some of these issues up front before you begin the process.

I'm sure there are other things you might want to consider but the main thing I wanted to accomplish is to get you to think about mapping out your project so you can get a clear idea of how to tackle it right.

With that out of the way, let's go through a list of all of the items that you'll need to work on.

OK. Now, it's time to break down each part of the roster you'll need to consider editing. Let's go through them.

That's quite a list. And it's pretty daunting. I honestly don't know how people get through the entire project. It's an incredible time consuming one at that. It's likely that when and if you finish your roster project, it is time for the new game to come out and you have to start the process all over again.

An alternative option to editing a complete custom roster

If you think editing your own full custom roster is to much of a project, there is another idea. Consider specializing in one of the areas above.

What are your suggestions for wanna be roster editors?

What kind of suggestions and tips would you give to future roster editors? Can you think of anything I need to add to the checklist?
Let me know in the comments.

Also, while you are here, sign up for my free email updates in the box below.