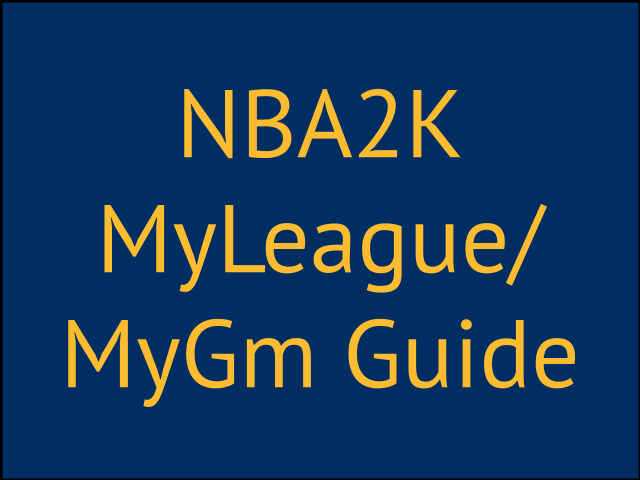 One of my favorite game modes to play now in NBA2K is the MyLeague and MyGm modes. But when I first started playing them, I was little lost and not sure where to start. I thought others might feel the same way, so I put this guide together to help you figure out how to play and have the most fun with it.

What are the NBA2K MyLeague and MyGM modes?

But don't let that overwhelm you, you can just control one team if you want.

What is the difference between MyLeague and MyGM?


The first thing I was always confused about was what the difference between MyLeague and MyGM was.

In both MyLeague and MyGM, you can play the games or sim them. You can automate most of the tasks in both modes if you want.

Here's a video I did on the differences between MyLeague and MyGM to help a little more.

Should you do a MyLeague or MyGM?


Once you know the difference between MyLeague and MyGM, the next thing you'll need to figure out is which one you will want to do. If you haven't done one before, I'd suggest you start out with MyLeague's first. That's because you won't have to deal with the story mode aspect, managing the owners expectations or dealing with player complaints.

I'd also suggest that you spend some time simming through some seasons just to get the hang of what happens during the year and during the offseason.

This will get you familiar with and more comfortable with how it works. Once you've done that, you can then delete those files and start from scratch with a serious file.

The other thing I would say about which one to use is that if you like the idea of a story mode or you want to build and overpowered general manager, then you'll want to use MyGM. If neither of those appeal to you, I'd go with a MyLeague.

Now, let's talk about the different options you can choose inside of 2K.

Options available in the MyLeague menu


When you get ready to start a MyLeague in NBA2K, you'll be presented with several different menu options asking you what type of MyLeague or MyGM you want to start. Let's walk through each of the options:

Let's talk about some MyLeague ideas you could do and that will probably give you a better idea of what kind of MyLeague or MyGM you should start.

Here are some approaches you could take to using the MyLeague or MyGM files to give you a few ideas.

Those are just some of the many good MyLeague and MyGM ideas you could run with. Here's a video where I go into a little more detail about some of these ideas.


How to Set Up Your MyLeague


Unless, you have a lot of experience with changing the settings or working with custom rosters, I'd just go with the default setup with a difficulty level you are comfortable with starting at. Once you get more comfortable with how these two modes.

Ultimately, you can customize just about everything in a MyLeague and to a lessor extent the MyGM files which makes it a really cool mode and one that you can taylor to you specifically.

Here's a setup video I did for a current MyLeague series I'm running if you want to get an idea of how I go about it.

Learning how to manage your team


After you begin playing or simming games, you'll start having other questions you didn't know you needed answers to. These will be things like how to negotiate contracts, how to build a team, how to do trades, manage minutes, manage the salary cap and more.

As I build out this guide, I'll put links to certain things here in this section but in the meantime, check my Coach2K YouTube channel for the most up to date stuff and subscribe while you are there.

Most of my questions revolved around how free agency worked. So let's address that in the next section since it is pretty important.

How free agency works in NBA2K


The biggest learning curve is just understanding how free agency works in NBA2K. I think the best way to understand free agency is to watch my walkthrough here:


Now, you know the basics of what you need to know about these two modes. Check back periodically to see as I plan on updating this guide from time to time when it makes sense to do so.

I'm also interested in hearing about your MyLeague's and MyGM's. Let me know in the comments how your league is going or if you have any questions and I'll try and help you out.