Home How To Play Coach2K On NBA2K

How To Play Coach2K On NBA2K

I use to play a lot of online quick matches. When I first started, I would play around 400-500 a year because I didn't have anyone to play, but I don't really do that anymore. Over the last few years, I've gotten to where I hardly play quick match. I might now only if I want to practice on something versus a person and no one else is available. What I really like to do is play people who find me reading my site, through my videos on YouTube, my team page on Google plus, on Twitter or my posts on the various NBA2K sports forums.

While I do the best I can to play someone who asks me to play at least once, I can't guarantee we will play. If we do get a chance to play, I like to do it in a consistent manner so I thought I would put up a page that tells you exactly how to set up your settings if we do get to matchup and how I approach the game. 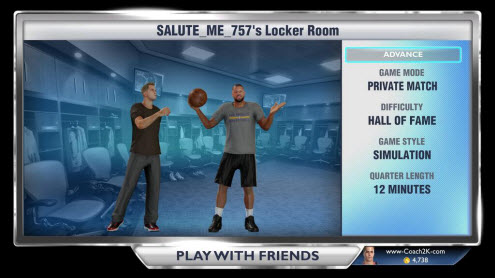 First, I am only on the Playstation. My PSN ID is www-Coach2K-com. (Note the hyphens instead of dots). Feel free to friend me and I will add you. The only thing that I ask is that you keep your language clean. While it's rare, I have had to block a couple of people because of their bad language. I'm not the only person who uses my Playstation so out of respect for them, I just kind of keep an eye on that.

Before inviting me, send me a message to see if I am available. If I am, I'll let you know. The best way to reach me is by connecting with me on Twitter.

To get a game going, just go into your online game mode and choose play with friends. Once you are in there, send me an invite and then set your settings to a private match. I only play on hall of fame difficulty, simulation sliders. I do this to keep every game uniform so it plays the same across all of the modes I play in. For all my match ups, I also prefer 12 minute quarters so if you don't like 12 minute quarters, then you might not want to play me.

That's for a couple of reasons. One, it's a lot easier to blow some out of the gym on 5 or 6 minute quarters than it is 12 minutes. A longer game often smooths out the momentum in the game. The second reason is that it takes a little more strategy in a longer game. You have to factor in fatigue and foul trouble. It also gives someone a chance to hone in your tendencies to get a chance to stop what you like to do. Not only that, if you consider yourself to be a realistic player, it makes sense to play a 12 minute quarter game.

For reference on how to invite, I also put a picture up above so you can see what an invite looks like.

The team that does the invite is the ROAD team in a play with friends match. Typically, I ask you to do the invite if we are only going to play one game. That means you will be playing in Indianapolis as I only play the Indiana Pacers as my team.

You can play as any team that you want and play any way that you want. I don't whine about cheese or game exploits or lead passing or any of that stuff. While I find that stuff annoying I deal with it and move on. I much prefer you utilize good team basketball skills to win.

I also love it most when people show up with a team I don't see very often. We all have seen our share of Miami and Oklahoma City. Why not mix it up a bit and play a team not many people play especially if you are a fan of that team and live there? It's much more interesting playing versus a true fan of the team.

In addition, I also don't promise you that I will play a certain way. I do the best I can to play in a way that I think is appropriate and I live with winning or losing playing that way. Over the years, I've found that people get mad at the slightest things, expect you to do things the way they do them and while I've been able to improve from when I began playing a few years ago, I am human too. I will make mistakes, I will get frustrated too and that will show up in my game play sometimes.

From the day I started playing NBA2K, I've advocated a no rules, no quitting, open play style approach to everyone I come into contact with. I've since discovered many people don't agree with that stance and that's fine. Many unspoken rules and expectations hide behind every opponent you might play. Number one among them is quitting at the first sign of something that happens they don't like.

People often confuse my approach for the game as being an advocate for exploiting it in certain ways and that couldn't be farther from the truth. What I've always felt is that you should try and evolve your game into one you can win with that will give people very little to point to as the "reason" they lost and to just play basketball. The real truth is that nearly every body I have played has exploited the game in some way. It's just not so obvious in certain ways.

But - as much as I have repeated that in everything I've posted online, people often forget my position on these things as well as the fact that I've never proclaimed I am the greatest or that I am going to beat everyone I play nor promised them a certain game experience.

Because I've got a username like Coach2K, the expectations for me are a little higher than they might be for you and that's perfectly fine. Because I chose it, people often expect me to say I'm going to beat everyone I play and have a play style that is beyond reproach but that isn't the case.

While I consider myself a hall of fame level player because I have beat the best CPU teams on hall of fame difficulty with what I feel is pretty clean an enjoyable game play, I really am only a decent player versus other users especially if I only play you once or twice and you are like 20 years younger than me.

Bottom line is this - just remember that I'm not out there saying I'm the greatest or anything. I just love to play and get people out on the court and hope that you will seek to improve your game from what you see in quick match with constant zones, double teaming, charge taking and so on.

Remember too, I get a lot of requests to play games. I can't always squeeze everyone in but will do the best I can. If you send me a request to play and I don't answer it, it's because I'm probably playing another game or my assistant coach "The Kid" has the controls. As far as recording the games, I can't promise you will make it on my YouTube channel as it takes a lot of time to do commentary and put a game together and upload it to my channel but it is possible I might stream it on my twitch channel and if I do it would be archived a few games until it drops off.

At the end of the game, you can expect that win or lose I will say good game. Even if I didn't like the way you play, I'm not going to use that as a reason to not be your friend just because you played a certain way.

Above all, I believe in being a good sport and of all the games I've played, NBA2K seems to give people the impression that they can use any excuse they want to be poor sports about what in reality is just a game.

My main goal is to get people playing and make a decision to start work on putting a better product on the court over time. You can only do that by competing, learning from others and while winning is cool, unfortunately losing is the best teacher.

Good luck and I hope to see you on the court soon. I've made a ton of friends playing NBA2K and there's always room for more.